NARVAL I and II

The first Next-generation Aircraft Remote sensing for VAlidation Studies (NARVAL I) Campaign took place in December 2013 and January 2014. It was divided into NARVAL South, in Barbados, and NARVAL North, in Iceland, respectively. 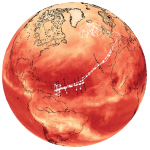 All Research Flights completed as part of the NARVAL I Campaign, image credited to Klepp et al. (2014)

Over the course of the entire campaign, there were 15 research flights were completed using the High Altitude Long range aircraft (HALO). Some of the observations recorded during these flights include radar, lidar, radiometers, optical spectrometers, and dropsondes (Klepp et al., 2014).

Large Eddy Simulations (LES) are being completed, using the Dutch Atmospheric Large Eddy Simulation (DALES), for some of the NARVAL South Campaign flights. During this part of the campaign, there were 8 research flights. Many of these were local flights from Barbados and had a flight track reaching approximately halfway across the Atlantic. The remaining flights were to and from Oberpfaffenhofen (Klepp et al.,2014).

Currently simulations are focusing on Research Flight 4 which took place on December 14th, 2013, the main reason for this is due to the presence of an elevated moisture layer during the flight. During this flight, there were 11 dropsondes launched. The LES are being run for the region around each dropsonde launch position. These simulations include the dropsonde profiles in the LES input files, so the LES is being nudged towards the observed state.

Some preliminary results of the simulations include thermodynamic profiles and time-series plots. Additional comparisons with observations will be completed.

The international EUREC4A campaign took place in February-March 2020 in the Caribbean, in an area east of Barbados. One of the main goals is to probe the subtropical marine Trade wind boundary layer with state-of-the-art instrumentation, including fast-flying high-altitude aircraft (HALO) and slower low-altitude aircraft (the ATR), research vessels, sensors at the BCO site at Barbados, and satellite images. A particular meteorological focus is on detecting and understanding mesoscale cloud patterns. Part of this is an effort to reliably estimate the large-scale conditions in which these patterns form, including subsidence, pressure gradients, and advection. To this purpose, HALO flew mesoscale circles.

To accompany the measurements we configured and conducted Lagrangian LES experiments on a selection of days. Each trajectory intersects with one of the mesoscale circles. Some first (preliminary) results are posted below. 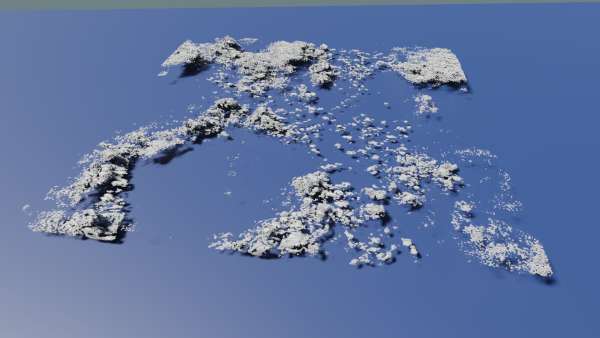 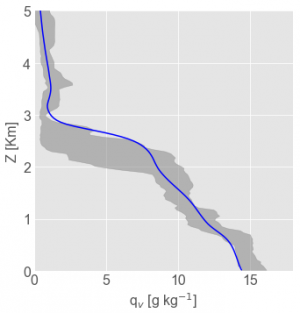 The MOSAiC (Multidisciplinary drifting Observatory for the Study of Arctic Climate) campaign took place from September 2019 to October 2020 during which the RV Polarstern spent a total of 10 Month frozen solid in the Arctic sea-ice. It acted as a base camp for multidisciplinary research of hundreds of scientists from over 20 nations. The ambitious goal of the campaign is to advance the understanding of the Arctic climate system with a special focus on the impact of global climate change.

As part of the (AC)$^3$ Project, we conduct and analyze Large Eddy Simulations in close connection with observational data. This combination enables us to verify and constrain our simulations using an unprecedented amount of experimental datasets and simultaneously further the understanding of a dynamic Arctic atmosphere.

<to be filled in>

<to be filled in>