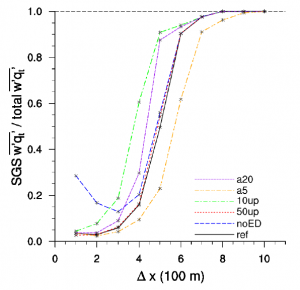 Figure 1. Visualization of the grey zone in turbulent transport in a subtropical marine shallow cumulus topped boundary layer. Shown is the ratio of the subgrid flux to the total flux as a function of horizontal resolution of a series of LES simulations of the RICO shallow cumulus case, featuring a scale-adaptive version of the EDMF scheme. The intermediate values reflect the range of resolutions at which the resolved contribution is as large as the subgrid contribution, and can be interpreted as the grey zone. Figure courtesy of Maren Brast, IGMK.

In recent years the capacity and speeds of supercomputers have improved rapidly. As a result, GCM resolutions are now feasible at which some previously parameterized processes become at least partially resolved. This situation is sometimes referred to as the “grey zone”. The range of resolutions covered by the grey zone depends on the process of interest. While for deep convection it is usually assumed to be situated below 10 km, for boundary layer processes the grey zone can be found at much smaller grid-spacings. As a consequence, now that GCM resolutions are “entering” the grey zone, certain assumptions on which operational, classic parameterizations are based no longer hold. To solve this problem new parameterizations have to be developed that are aware of, and also adaptive to, the scale of both the process they are representing and the grid-spacing of the GCM. This new branch of atmospheric sciences is also known as “scale-adaptive parameterization”.

One of the main goals of the InScAPE research group is to develop scale-adaptive schemes for moist convective transport and clouds in the boundary layer for use in next-generation circulation models. Topics of interest include the size statistics of cumulus cloud populations, cloud macrophysics and microphysics, and convective and diffusive transport in the boundary layer. Various ways of parameterizing these phenomena are explored, including PDF modeling and multi-plume modeling. We strive to integrate and unite the representation of many subgrid-scale processes into one internally consistent framework, that is generally applicable at a broad range of resolutions and that is well-constrained by relevant measurements.