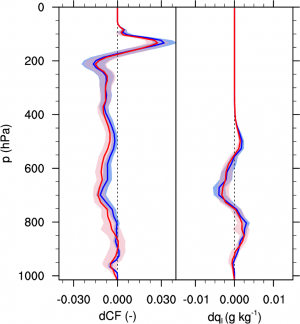 Figure 3. The change in cloud fraction (left) and cloud liquid condensate (right) between the future climate (AMIP4K) and present-day climate (AMIP) at the Barbados Cloud Observatory (BCO), for the dry season. The EC-EARTH GCM simulations for the CFMIP5 project are shown in blue, while its SCM forced with cfSites data is shown in red. The solid line is the 30-year average value and the shadowed region displays the variability between monthly samples, calculated as the rms. Figure courtesy of Sara dal Gesso, IGMK.

Apart from parameterization evaluation and improvement the InScAPE group is also interested in the impact of cloud representation on the Earth's climate. Low level clouds play an important role in the global energy budget, by vertically transporting heat but also by reflecting solar (shortwave) radiation and absorbing and emitting terrestrial (longwave) radiation. The question is then how such clouds will change in a warming climate; will there be more or less clouds? And how will this change affect the energy budget? The big question is if the cloud change will dampen or amplify the warming trend as induced by the change in greenhouse gases. This feedback mechanism between low clouds and global climate is not well understood, and has been identified as a major source for uncertainty in climate prediction using general circulation models.