Our group use a wide range of numerical models of atmosphere, from regional models to large eddy simulations and single column models.

The Dutch Atmospheric Large-Eddy Simulation (DALES) model is one of the two large eddy simulations (LES) codes employed at InScAPE. A library of prototype cases is used for research and for further code development, including convective cases as well as cases of stratiform clouds. Many of these have been developed within the context of international model intercomparison projects, such as the GCSS boundary layer cloud working group. The library of cases also includes realistic cases at our Testbed locations that are based on a blend of observations and analyses obtained from weather forecast models. The testbed part of our case library spans multiple years at multiple locations of interest.

The current main version of DALES 1) does not include a mixed-phase microphysics scheme. To this purpose we have implemented a full 3-phase microphysics scheme of Seifert-Beheng 2). This code development work has been supported by the (AC)3 project. Our enhanced version of DALES has been used for high-resolution simulations of Arctic clouds observed during ACLOUD and PASCAL field campaigns 3), and it has also taken part in some model intercomparison studies 4) 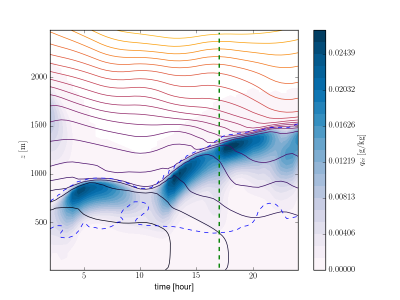 Another activity is to implement the ED(MF)n scheme for moist convective transport and clouds into DALES, as a new subgrid scheme option. The purpose of this activity is to allow using DALES as a simplified circulation model that maintains non-hydrostaticity, in order to perform scientific research on parameterizing convection in the boundary layer grey zone. More information about this research effort is provided on the EDMF documentation page.

We use the ICON (Icosahedral non-hydrostatic) model in two different version - the LES version ICON-LEM developed during the HDCP2 project and the general circulation model developed by the Max-Planck-Insitute for Meteorology (MPI) and the Germany Weather Service (DWD).

Apart from its innovative triangular grid, ICON has several advantages over existing models; in particular the combination of a non-hydrostatic core with the option of heterogeneous forcing and non-periodic boundaries creates ideal opportunities for research of scale-adaptive parameterizations. The setup allows to simulate various synoptic situations at different places and a reasonable comparison to observational data - with this the testbed-situations for parameterization development is growing and getting more variable. For the LES simulations forcing by the COSMO-DE or IFS model is used, which brings the information about the synoptic situation to the outer domain and coarsest resolution. Then the resolution is refined within several nests to actually reach a resolution that is able to resolve large eddies. For simulations around supersites we use at the moment a starting domain of 110km diameter and ca. 600m resolution, then three more nests are included ending with a resolution of ca. 75m (see Figure 1 for a setup around Ny Ålesund). 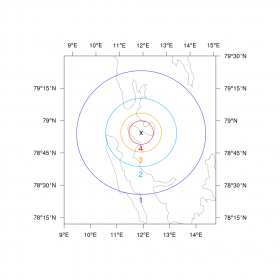 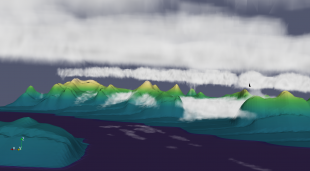 Figure 1. An impression on the ICON-LEM simulations around the Ny Ålesund meteorological site on Spitsbergen performed by the InScAPE group. The left panels shows the set of nested simulations, while the right panel shows a visualization of clouds and the included topography.

Single Column Modeling (SCM) is a technique in which only a single vertical column from the grid of a GCM is integrated forward in time. The boundary conditions and larger-scale forcings are prescribed, usually obtained from a larger-scale model and/or observations. The suite of subgrid-scale parameterizations of the GCM is free to act, and can create their own unique model state. This can give insight into the behavior of parameterizations at process level, and can help in understanding model biases as diagnosed in a GCM.

While the highly reduced cost and enhanced transparency of SCM simulation are clear benefits, one should always be aware of its limitations. For example, the interaction with the larger-scale flow is exclusively one-way (down-scale). However, new techniques are being developed to allow the larger-scale flow to respond to the subgrid physics in SCM simulation. One option is to make use of the Weak Temperature Gradient (WTG) approximation in the tropics, in effect coupling the columns horizontally by severely constraining the horizontal temperature gradient in the temperature field.

Another approach for introducing simple feedbacks between resolved and parameterized scales is to simulate a set of neighboring single column models on a small horizontal grid. While in each column the parameterized physics acts as usual, a dynamical core can then takes care of any horizontal interactions that might develop as a result of variations among the columns. The set of columns thus become interactive, ranging from weakly to possibly severe. The former might happen at coarse horizontal resolutions, when all subgrid processes are resolved and the variation among columns can be expected to be small. The latter happens in the grey zone of convection, when resolutions become high enough to partially resolve previously unresolved processe. A microgrid approach in single column modeling can thus well be used to investigate the scale adaptivity in for example convection schemes.

The LES infrastructure lends itself perfectly for SCM on microgrids, as i) it already has a fully non-hydrostatic dynamical core, and ii) it can easily be run on small grids. An additional advantage in this respect is that the LES is a lot simpler in its setup compared to a GCM, which can enhance the transparency of any numerical experiments, making them easier to understand. The LES thus effectively becomes a non-hydrostatic playground for the development of scale-aware and scale-adaptive convective parameterizations. The only requirement is to implement the physics package from a GCM into an LES as a subgrid scheme.

The SCM-on-microgrids approach for developing scale-adaptive convective parameterization has recently been pioneered by InScAPE, by implementing a multi-plume scale-adaptive version of the ED(MF)n convection scheme based on cloud size distributions into the DALES code (Brast et al, JAMES, 2018. The results are so promising that we have adopted it as one of our main research tools. A showcase with results with DALES-ED(MF)n for a selection of prototype cumulus cases can be found here