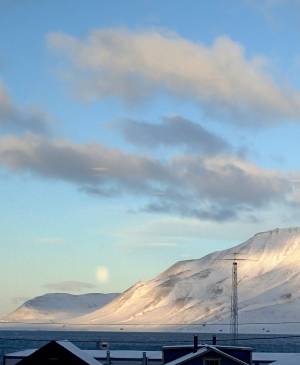 Arctic climate features an abundance of low-level clouds. It is well known from scientific studies in the past that these clouds can significantly affect the radiative energy budget of the atmosphere and at the surface1). For these reasons it can be expected that low-level clouds could play an important role in the currently ongoing warming of the Arctic climate, a process also known as Arctic Amplification.2) However, many aspects of the interaction between clouds and the high-latitude climate are still not fully understood, which is partially due to a lack of reliable, long term cloud observations at high latitudes. Partially for these reasons Arctic clouds are still not optimally represented in numerical circulation models for weather forecasting and climate simulation 3).

At InScAPE fine-scale modeling of Arctic clouds is performed to gain insight into these clouds at process level. Various model configurations are explored to this purpose, focusing on a few key cloud regimes of interest. A central effort is the confrontation of these models with reliable measurements of Arctic clouds and their environment.

Particles of liquid and frozen water in Earth's atmosphere are known as hydrometeors. Both phases can co-exist, a situation referred to as mixed phase clouds. Such clouds are persistently observed in the Arctic. The liquid phase can occur at temperatures that are far below freezing. Such supercooled cloud droplets are often found when few ice condensation nucleii are present in the volume of air. After the formation of supercooled droplets, it takes some time for them to freeze over and become ice crystals. These delicacies make mixed phase clouds difficult to model. This applies not only to large-scale weather and climate models, but also high resolution models such as LES. Hydrometeor sizes often do not exceed the micrometer scale, and are always much smaller than the typical gridspacing in models. As a result, hydrometeors have to be parameterized through a microphysics scheme. Such schemes are not perfect and introduce sensitivity to parametric choices, in both LES experiments and weather and climate model simulations. This motivates further research into this topic.

Mixed phase clouds in the Arctic are typically embedded in a much larger air mass, the origin of which can be far remote, even outside the Arctic. Mixed phase clouds play a key role in how such air masses transform as they move in and out of the Arctic. The presence of liquid hydrometeors in such air masses has been reported to greatly affect the speed at which the sea ice melts in the warming Arctic climate. Accelerated melt has been observed to coincide with liquid cloud presence as part of intrusions of warm and moist air into the Artic. This is linked to the strong impact of liquid clouds on the downwelling long wave radiation at the surface. Another way in which mixed phase clouds interact with the Arctic climate system is through subsidence, which can act as a control on the persistence of mixed-phase cloud systems (see illustration). 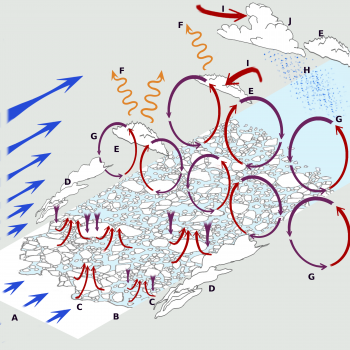 Cold air outbreaks (CAOs) in the Arctic are situations in which a low level mass of cold air initially situated over the sea ice is advected across the ice edge and continues over open water. This process is accompanied by the formation of a convective boundary layer that deepens rapidly, featuring strong surface heat fluxes as well as the formation of low-level mixed-phase clouds. The dynamics in the CAO boundary layer are often complex, as illustrated in Fig. 2. Often these clouds are organized into streets, which at some point downstream of the ice edge tend to break up into bigger individual cells. These cells, often arranged into a spoke-pattern, can appear as either open cells (with a cloud free center) or as closed cells. Recent research has suggested that microphysical processes play an important role in determining the eventual cloudiness in the cell centers.

In the recent ACLOUD field campaign in May 2017, which is part of the ongoing (AC)3 project, some cold air outbreaks where sampled in the Fram Strait west of the Svalbard group of islands. At InScAPE we are currently performing fine-scale model simulations of these CAO cases, making use of ACLOUD measurements to assess their realism.

Scientific research of complex natural phenomena often strives to create a setting which is as simple as possible, in order to enhance the transparency of the problem of interest. The same is true for Arctic clouds. Many studies have focused on relatively homogeneous situations that might be easier to simulate and understand, such as clouds over open water or solid pack ice. Recently, situations of complex geography are getting more attention, such as the interaction of clouds with a surface consisting of broken ice shelves. However, Arctic clouds at locations with complex orography are still understudied. Often these cloud scenes consist of multi layer clouds, and are heavily affected by local secondary flows. To represent these interactions in a fine-scale model simulation is not straightforward. 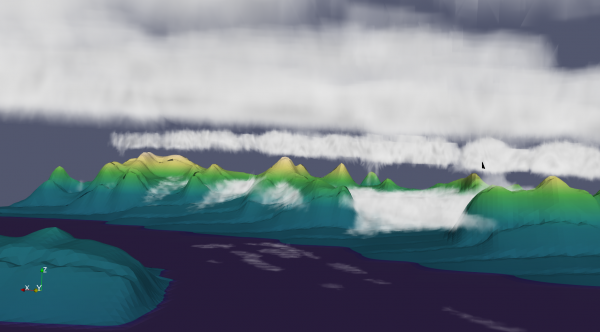 At InScAPE we investigate which model configuration yields the most realistic simulations of cloud scenes in areas of complex orography. To this purpose we conduct simulations with the ICON-LEM at the AWIPEV Observatory at Ny Aalesund. A motivation for using ICON-LEM is its capability to perform LES simulations over complex terrain, also profiting from its icosahedral grid.

Various field campaigns have taken place near the Svalbard archipelago in the context of the ongoing (AC)3 research project. Various instrument platforms were involved, including fixed sites (AWIPEV site at Ny Aalesund), ship cruises with the PolarStern research vessel, and flights with the Polar 5 and 6 research aircraft. A key part of the overall research strategy was to combine the benefits of all three platforms. For example, on many research flights the aircraft met with the PolarStern on its journey North towards the ice edge, and during the period in which it was frozen into the solid pack-ice. During some periods all three platforms were situated at the same location at Ny Aalesund, combining all instrumentation. In the modeling of Arctic clouds at InScAPE we focus on these IOP periods, to optimize the availability of relevant data to support the simulations.

At InScAPE the fine-scale simulations of Arctic clouds are performed with two models. The Dutch Atmospheric Large Eddy Simulation model (DALES) 4) is an LES code that has been developed decades ago, and has participated in many scientific model intercomparison and evaluation studies. The Icosahedral Non-hydrostatic (ICON) model was recently developed at both MPI Hamburg and the German Weather Service (DWD), and can be applied at multiple resolutions. While both codes share many features, in particular their capability to perform realistic high-resolution simulations of boundary layer clouds, there are also a few key differences. Apart from numerical differences these mainly concern the spatial homogeneity of surface properties such as orography, and the capability to perform simulations in a nested setting. At InScAPE we aim to use both codes in conjunction, profiting from the benefits of both approaches.

The DALES and ICON models are described in more detail in the overview of models.

Perhaps the majority of LES studies so far have focussed on weather scenarios in the subtropics or tropics. The absence of ice particles allows for the use of (typically somewhat simpler) warm microphysics schemes (only liquid water droplets are considered) or with a simple cold microphysics schemes (both liquid droplets and ice droplets are considered). However, neither of these approaches is suitable for arctic conditions where the ice and liquid phase often coexist in clouds. Therefore, with the goal of preparing DALES for simulating low-level Arctic clouds, as a first step we have implemented the cloud microphysics scheme of Seifert&Beheng 5). The full implementation of this two-moment scheme for 3-phase microphysics, which includes multi-species interactions but also interaction with radiative transfer, is required for a realistic representation of for example mixed-phase clouds.

Our full implementation of the Seifert&Beheng scheme uses two-moment description for all the hydrometeors, ice cloud water, and also liquid cloud water. The further enhancement include:

The performance of this implementation has been tested on chosen semi-idealised cold-air outbreak cases. This includes the including M-PACE 7), which was an observed cold-air outbreak case of the coast of Alaska, and ARM 8). However, it is intended to be employed also for the fine simulation of Arctic spring stratocumulus. With the aim to properly represent a varying concentration of aerosols in Arctic, this implementation also allows to define vertical profiles of CCN.