We use a commercially available fish-eye surveillance camera to collect images of the sky and determine cloud amount. Images with a resolution of 800×600 pixels (BMP format) are taken every 20sec. Every unsaturated pixel above the horizon is investigated for its blue-to-red-ratio and categorized as sky (blue), thin-cloud (light-blue) or cloud (white or gray). Pixels are counted and stored as relative cloud amount as well as palette based png images. From the number of saturated pixels around the sun a flag for the visibility of the sun is derived.

Channels are in the visible range with average wavelengths of ~650nm (red), ~510nm (green), ~465nm (blue), have a broad spectral sensitivity and do overlap. Peak sensitivity wavelengths are at 560nm (red), 530nm (green) and 430nm (blue) (at least these are the peak sensitivities of our visual system which a camera tries to mimic). But unfortunately the system is not calibrated: the camera adapts its exposure to received light (i.e. sensitivity changes in time). White balance is set to a constant value to ensure that sensitivity of the channels relative to each other is constant. Every 15minutes is varied exposure (collecting time of the sensor) and gain (amplifier within the sensor) which might be used to derive an absolute calibration.

The camera replaced a YES total sky imager which died after some years of operation. 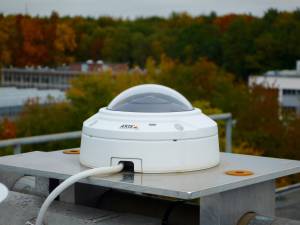 The camera is an AXIS M3027-PVE Fixed Dome Network Camera with a common Omnivision CMOS rgb-sensor. It is installed at Forschungszentrum Jülich on the roof of the IEK-8 (Institut für Energie- und Klimaforschung: Troposphäre).